Cellulose holds a special place in the heart of Swede’s. Sweden is the world’s third largest exporter of sawn timber and Europe’s second-largest producer and largest exporter of sawn softwood. But the Swedish forest’s provide more than jobs/income, from berry picking to mushroom picking to highly regulated hunting opportunities, cross country and downhill skiing, you name it, Swede’s are never far from their rich cellulose resources. But, there is another realm of cellulose where Sweden is leading the way. Enter, the Gatenholm’s.

Paul Gatenholm from Chalmers University of Technology is one of the world’s highest ranked Professor’s in cellulose. With a focus on the structure and material properties that allow hierarchical structure assembly from this polysaccharide. In December 2014 the patent application for the use of cellulose as a biological ink for 3D printing and cell culture was filed and was granted in the US in 2020 and in EU June 2021. Cellulose has similar properties to collagen fibres and with varied composition and crosslinking can be designed according to requirements to match various cellular environments. Though foreign to animal systems outside of the digestive tract, the bioink was shown to be biocompatible in 2014, in the absence of cytotoxicity and with a minimal foreign body response.

Erik saw opportunity and brought a customer-oriented approach to CELLINK, talking to researchers and clinicians; ‘What do you need this product to do?’. From there, ‘how can we make your processes better and more cost effective?’. Erik’s team of scientists and engineers were challenged both technically and commercially to develop capabilities for complementary products and technologies. “If you solve the need, the dollars are there”. And from here BICO was born.

BICO is a company with 12 subsidiaries aimed at innovating healthcare through Bio Convergence, the mass convergence of multiple different fields, from biology to engineering, nanotech and IT, just some of the spaces in which BICO now owns technology potential. CELLINK still exists but as a subsidiary of BICO. BICO combines technologies like robotics, artificial intelligence, data science and 3D-bioprinting for new solutions in single cell handling, live cell imaging, multi-omics, drug discovery, tissue engineering and diagnostics. CELLINK was listed on the Nasdaq Stockholm the 3rd of November 2016 and has risen from a value of 150MSEK to a current value for the BICO franchise of 27.4BSEK (per October 8), and 3 employees in 2016 to now over 1,000 in 2021. Extremely rapid growth. 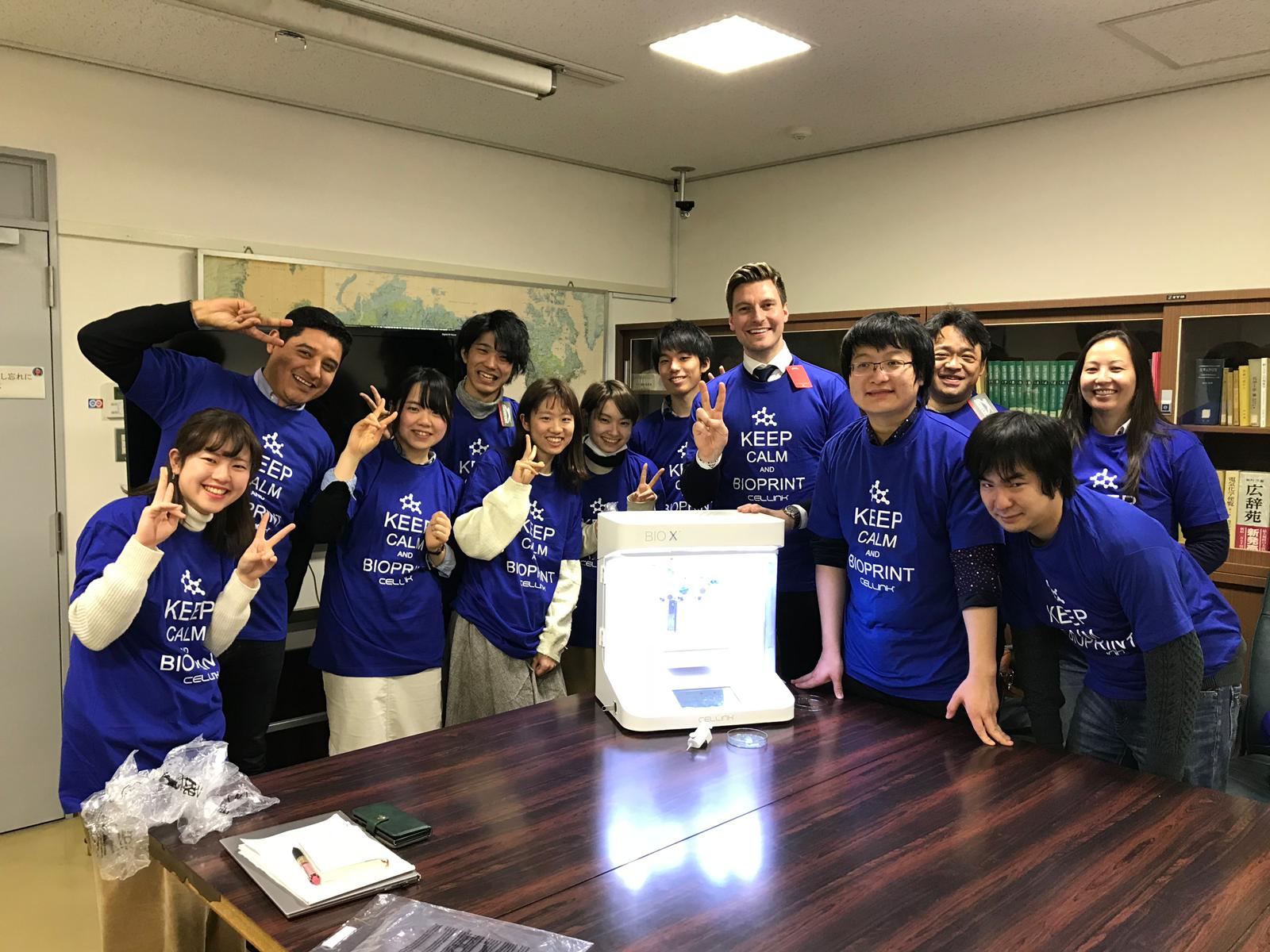 Erik Gatenholm and CELLINK colleagues from their newly opened Japanese offices in 2019.

Now this is not sounding very ‘lagom’. Where has this entrepreneurial drive come from? If you ask Erik, his drive is a balance of the ‘flat’ structure of Swedish society that celebrates ideas and collaboration irrespective of hierarchy, and the ‘American dream’ to celebrate and empower rapid growth. Though being born in Sweden, Erik moved to Virginia, USA, at 10 years old, with his Dad taking a position at Virginia Tech. His Dad encouraged him to stick his neck out, that anything is possible, that starting something is not enough, you must follow through. “When Swede’s dare to go outside the box the researchers are highly successful. It’s just a small minority that dares.” says Erik.

The ability of his father to dedicate his life to a single material was also an important lesson. The Swedish pride, cellulose. The potential of a technology to be applied to a diversity of needs is not lost on BICO, who aim to apply their mechanical, robotic, automation, computing capabilities for broad health impacts.

What does BICO mean for ATMP?

Erik sees continued potential for the company in Sweden’s unique environment of fantastic researchers and highly skilled workforce in manufacturing and R&D capacity. There a lot of potential to partner with BICO for safety, toxicology, function, potency studies….and of course tissue engineering. Another important space is the diagnostics and monitoring capabilities and the potential for precision medicine, as defined by the Swedish life science strategy “molecular biosciences (omics technologies) and bioinformatics, as well as the advent of new high-resolution imaging techniques” needed to take the field forwards.

BICO has customers all over the world, Stockholm to Sydney. The following highlights some of their exciting clinical applications. First stop, Stockholm! 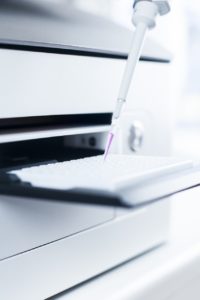 The Crosetto group studies genomic alterations and fragility in relation to the three-dimensional organization of the genome and gene expression, with a strong focus on cancer. An important mission of the group is to develop diagnostic capabilities based on (single cell) genomics and make them affordable to a large community. Their tool of choice is the I-DOT from BICO subsidiary Dispendix. Using I-DOT for contactless dispensing of molecular biology reagents, such as restriction enzymes and PCR primers, they have developed CUTseq, a versatile and highly cost-effective method for DNA sequencing library preparation, which can be used to profile DNA copy number alterations in hundreds of samples in parallel, including precious clinical tumor samples. The CUTseq technology is currently being used in collaboration with the Oncology department at Karolinska University Hospital to profile breast cancers before and after chemotherapy to contribute to tailoring of treatment. The Crosetto group is also working towards making CUTseq compatible with single cells, and again the I-DOT system is playing a pivotal role here. Recently, the group has also leveraged I-DOT to develop COVseq, a method for high-throughput sequencing of SARS-CoV-2, which is currently being applied for genomic surveillance and early detection of new Covid-19 virus variants.

Dr Gentile is an internationally recognized expert in the field of 3D bioprinting of “mini-hearts” using stem cell technologies and bioinks. He leads a multidisciplinary team of experts in cardiovascular bioengineering, biomaterials, pathophysiology, medicine and pharmacology from Australia, Europe and the US, all working together to translate findings from the bench to the bedside. They are global leaders with a vision for how the bioprinting field of cardiac tissues will further develop. One exciting development is their work on genetic and chemical inhibition of downstream targets of doxorubicin, which found that cardio-toxic effects in leukemia and lymphoma treatment could be inhibited within 24 hours in mini-hearts, paving the way for novel approaches for cancer patients using bioengineered tissues as personalized medicine diagnostics. Clinically, challenges related to 3D bioprinting for cardiac surgery include refining vascular networks and contractile function, with the goal of creating  optimal combinations of “Lego’s bricks” composed of patient-derived cells, and the ability of the graft to contract at the same pace as the host heart. Dr Gentile’s team has recently finished a study in small animals looking for both safety and efficacy of transplant of their printed tissues and is working closely with clinicians towards big animal models to further evaluate the feasibility of this approach for patients. A recent partnership with industrial designers and artists has identified new ways for the successful delivery of bio-printed cardiac patches to patients.

We are very proud to see the impact BICO is having locally and internationally and look forward to more Swedish projects including BICO in their solutions for ATMP development. Initiating with the humble Swedish cellulose, the development of the BICO family is an exciting example of innovation and the importance of listening to the needs of stakeholders.

For Erik, when he comes back to Sweden, he has little desire to hang out in forests, surrounded in cellulose, but prefers to immerse in the seafood possibilities on the west coast. In the opinion of this International traveller, the west coast in Sweden has some of the best seafood in the world.