Sweden commits to ATMP manufacture near the arctic circle

Matfors to be world leading in industrial ATMP manufacture

14:35, boarded the fast train from Stockholm to Sundsvall. Got a seat with a table, powerpoint and free wifi. Travelling backwards for 3.5 hours but planning to work and I guess occasionally will gaze out the window as the world passes by. The trip is to visit Matfors, a 25min drive, or 2 miles say the Swedes (20km), from Sundsvall. On a latitude of 62.37°N, just 4 degrees from the artic circle. Reykjavik, Iceland at 64°N or Anchorage, Alaska at 61°N are probably the most well-known cities on a similar latitude to Matfors. With a population of 3,400 people it is surprising to hear that in Matfors there is a 7,000 square meter facility with 128 highly qualified staff producing large scale plasmid DNA for pharmaceutical manufacture. NorthX Biologics is the company aiming to be world leaders in industrial scale manufacture of ATMPs, under new CEO Ted Fjällman.

The news came at 13:00 the 15th of October, 2021. The Swedish government announced a partnership with NorthX Biologics to establish an Innovation Hub in Matfors to allow stakeholders to work with North Biologics in developing their industrial manufacture capabilities for advances vaccines and biological drugs, including ATMPs. This investment is part of Sweden’s Life Science strategy to be a leading Life Science nation by 2030 towards better health, life quality and economic prosperity for the Swedish and global populations.

But, why Matfors? How is it possible that such a small, unknown town in Sweden may be the critical link to realise Sweden’s aspiration to be “a world leader in development and implementation of advanced therapies by 2030”?

Matfors, translates to ‘food rapids’, thanks to the rich supply of salmon originally available in nearby rapids. Till the 1990s the industry of Matfors was largely forestry-based but mid-1960s the medical technology industry began, with pharmaceutical manufacture facilities established. Though ownership of these original facilities has changed a bit over the last 50 years, manufacture of pharmaceuticals has been a constant. The owner prior to NorthX Biologics was Cobra Biologics, who since 1998 has established a reputation in high quality process development, manufacturing and fill/finish services for plasmid DNA and viral vectors. Now in 2021 the Matfors site of Cobra Biologics has been purchased by Swedish investor Flerie Invest, founded by Thomas Eldered, co-founder of Recipharm, which under his leadership became a top 5 global pharma CDMO. The Cobra Biologics site has now been rebranded to NorthX Biologics.

Monday the 25th of October I visit the Matfors manufacture facility. Who are these people? Do they realise the pioneering effect their work has had on development of gene therapy pharmaceuticals? Do they realise what is coming next, how many patients in the future will benefit from industrially produced, affordable ATMPs manufactured in their world leading facility? The facility is yet to produce a cell therapy ATMP but Ted tells me “we’re convinced our manufacture processes can be adapted to one day be used by those who are manufacturing cell therapies in smaller scale today”.

I park myself in the “fika” room with the intention of randomly joining people for a coffee and a chat. 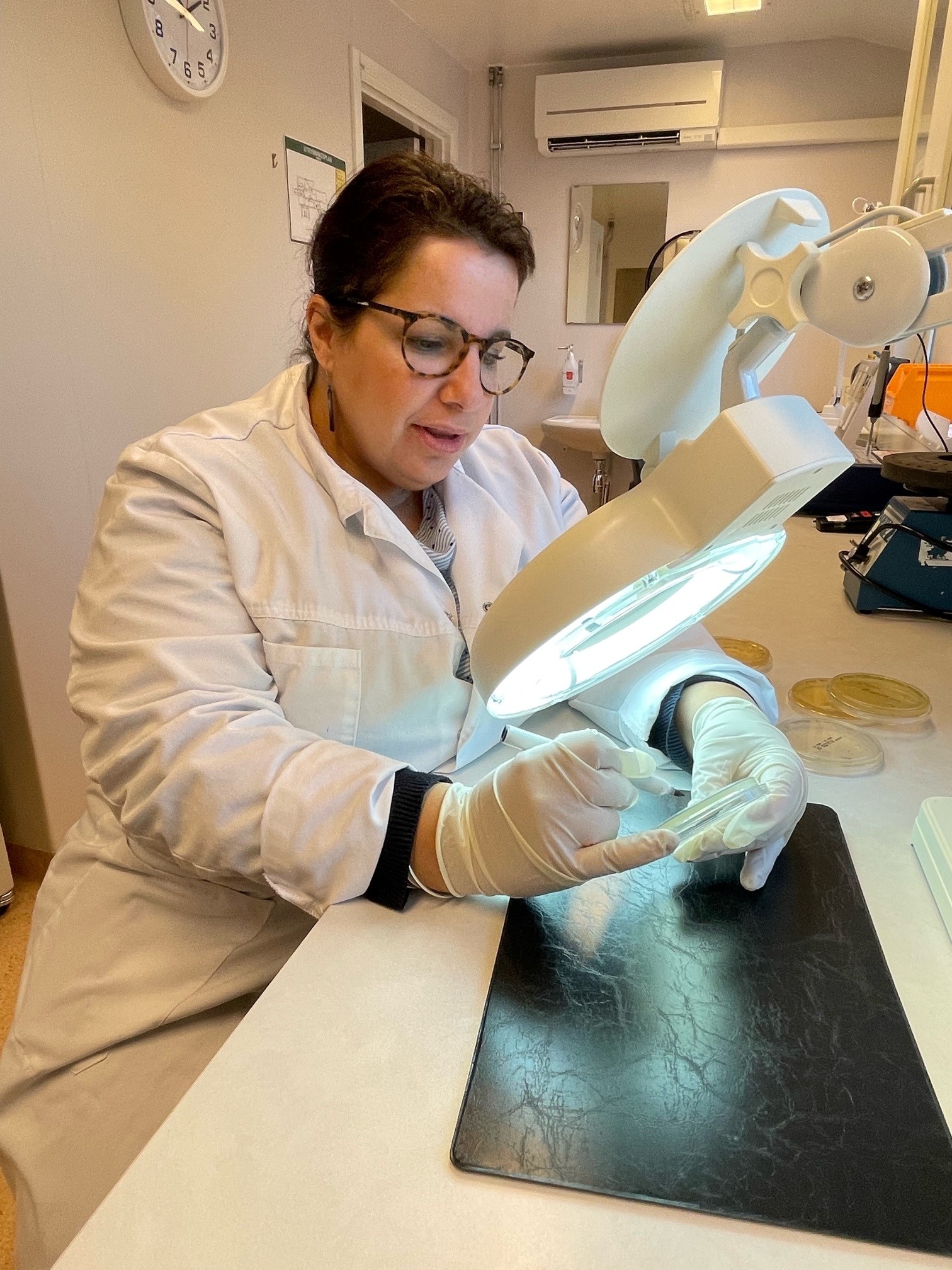 Luisa, busy on the job.

I meet a variety of people, Luisa comes from Portugal, has worked all over the world and now in the Quality Control department at NorthX Biologics. She was excited to move to Sundsvall for an exciting job opportunity that married perfectly her skills in sterilization and microbiology. Agnes works as a senior scientist in the Process Support group and comes originally from Germany. She’s a lover of nature and chose Sundsvall over Stockholm as it is closer to the mountains. Vicki works in Quality Control and comes originally from China. Luisa has an interesting view of living in the area. “It has enough to satisfy my ‘big city’ needs without many of the negatives of living in big cities” she says. “It may seem isolated but it’s nice to not have a long commute to work. I don’t get stuck in traffic. Travelling from Sundsvall to Stockholm is rather pain-free and you can use your travel time wisely”.

There’s an interesting diversity of people originally from the Matfors area, Annika works hands on in protein manufacture in the facility, Fredrik works with validation, Lisa who is knitting in the fika room, works as a proposal writer and I accost a bunch of people in blue clothing who work in the ‘downstream’ team. Today downstream is preparing for High Quality (HQ) plasmid manufacture tomorrow. What I envy about the ‘Matfors folk’ is that many left to study and then, when life got to that stage where they wanted to be closer to their families, they were able to move back to their villages AND secure jobs at the leading edge of innovation in their field of education. They did not have to choose between proximity to their rurally located families and their career.

Everyone I spoke to was excited about the news with NorthX Biologics and the trajectory they see for the next years. The possibilities to adapt their 50L bioreactors to various ATMP types and start materials is a tantalizing thought. “It’s amazing to think that this region will be a world leader in bringing affordable ATMP solutions to patients through development of industrially suitable manufacture processes for gene and cell therapy products” says Ola Tuvesson, Head of Process Development and Support. “I feel very proud that the work we do has brought us to this point. We’re all really excited to start working broadly through the Innovation Hub with researchers and product developers to understand their processes and, together with them and other national and international resources, progress them into GMP and scaleability feasible settings” Ola continues.

While the concept of the Innovation Hub is in the early stages for Vinnova and NorthX Biologics, big things are coming for Matfors and it might be time to consider what role you could have in it. The Innovation Hub is to be built in collaboration with existing ATMP, biologics and vaccine stakeholders including our ATMP Innovation Milieu and CAMP and programs developed within these initiatives like the CCRM Nordic Hub and the ATMP Centers. “The challenge and the beauty of the ATMP field right now is that we are all learning and exchanging expertise with others to bring innovative solutions to patients. The philosophy of the Innovation Hub is to assemble and synergise the great competencies that we have in Sweden and abroad in ATMP, biologics and vaccines manufacture and for NorthX Biologics’ industrially experienced staff to help scale-up to GMP for clinical trials and eventual commercialisation”, says Ted, CEO of NorthX Biologics. “We look forward to developing this field together towards establishing Sweden as a world leader in the space”.

See Ted and NorthX Bio represented in 2 sessions in our ATMP Sweden 2021 conference;

For updates on the ATMP Innovation hub keep an eye on our LinkedIn and subscribe to our newsletter.

A bit of tourism/culture for you from the fika room;

What is there to do in the area? Is it just forest and mountains? Actually, for a town of it’s size it has so much more than you would expect as it is essentially the gateway city to Norrland. Many companies have their Northern headquarters in Sundsvall and thus ‘big city’ facilities serve a wide northern radius. Just in Matfors you will find clubs for badminton, football, tennis, cross country skiing, swimming, wrestling, innebandy, orienteering and hockey. The Matfors skidklubb had the motto ‘hela Matfors på skidor’ and provides affordable opportunity for all to learn how to ski. Just in winter 2020, 300 kids attended the program. There is also a very active horse riding community. Sundsvall even has American Football, Basketball and Bandy. Luisa on Sundsvall, “In Sundsvall we have a great library, university, fantastic schools including an International School, Himlabadet waterpark, there’s also an active and friendly international community and film festival. I don’t miss big cities living here. I love my apartment life here and popping down to a café for a latte or hot chocolate with chilli! I don’t get so much energy from being in the forest but if I have a mission like mushroom picking, I can appreciate the proximity”. After chatting with Luisa you feel like packing your bags.

Culturally, the area is not as homogenous as you might expect. To my surprise the first person I met engaged in an interesting discussion about the #donttouchmyhijab movement and definitions of democracy that work against integration and instead push assimilation. Second surprise, the wallpaper in the bedroom of my AirBNB in Matfors had Chinese feng shui characters that were confirmed by Vicki to represent the 9 major areas of life, prosperity, reputation, relationships, family, health, creativity, knowledge, career and helpful people. I slept well that night.

Geologically the area seems to be quite famous with the Alnö complex, meaning ‘dead volcano’ and also known as ‘Northern Hawaii’. One of the largest deposits of carbonatite and alkaline igneous rocks in the world. There’s also the UNESCO world heritage High Coast, which in areas is 286m above sea level and currently rising at a rate of about eight millimeters per year. This phenomenon is the result of ongoing postglacial rebound following the disappearance of great ice sheets that covered northern Europe 10,000 years ago. The Sundsvall geological society is quite active.