Will autoimmune responses attack our ‘cures’ for patients?

Imagine the world where we cure disease by adding a gene or adding functional cells. Where patients are not needing lifelong tablets or injections, where transplants are not rejected and survive for life. Imagine the world where disease doesn’t even develop because autoimmune responses are reigned in…..what a magical land of fairy tale this seems…..but is this unrealistic?

Immune tolerance, the recognition of self vs non-self is one of the pivotal aspects of medicine. Autoimmune diseases are based on the immune system attacking things that should be recognized as self. Transplant is critically dependent on the matching as close to self as possible, and cellular therapies follow suit. Often the treatment/cure provided will still be subject to autoimmune attack. Think of a hemophilia patient being given Factor VIII treatment but it no longer being affective as the patient’s body already has developed antibodies against the protein. Even a gene therapy where Factor VIII is now produced by the patient’s body may be sensitive to autoimmune attack, rendering the treatment ineffective. When developing the cell and gene therapy products of the future and/or understanding the success/failure of those existing the immune environment that the treatment is going into needs to be critically understood/addressed.

Idogen, is a Swedish company building the foundations for this essential arm of healthcare. The platform technology since the company initiated in 2008 has been to create immune tolerance by making immature dendritic cells (DCs) from patient blood, exposing these cells to the relevant autoimmune antigen (using Idogen’s proprietary method) and then administering these mature ’tolerogenic’ DCs to the patient to dampen autoimmune attack. In the case of the ItolDC-028 cell product, in the hemophilia project IDO 8, the DCs give tolerance to Factor VIII needed for clotting in hemophilia A. 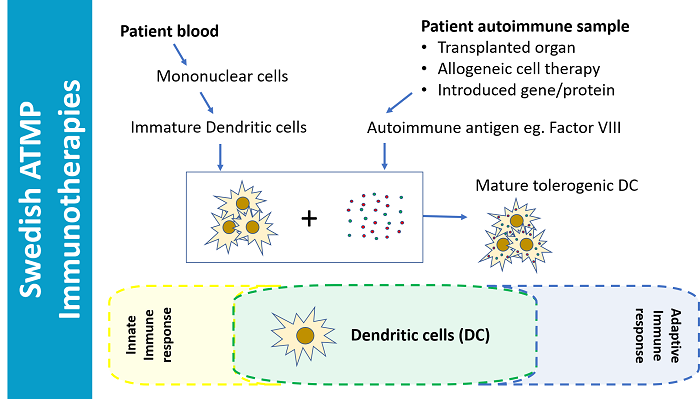 Disease prevention, graft success/persistence, treatment or gene therapy tolerance are just some of the potential applications of their autologous Dendritic Cell based immune programming. In comparison to ‘DC vaccination’, this is the opposite, instead of telling the immune system what to attack it is being told what not to attack.

Idogen believes their technology will greatly reduce dependence on immunosuppressants, which are ineffective long term and have significant systemic side effects including nefrotoxicity and diabetes and have a significant impact on solid organ transplant survival. “Long term graft survival in the last 40 years hasn’t really improved. Acute survival is better and has gained from improved medical treatments, but there is still a significant unmet medical need among patients for long term protection towards for graft loss” says Anders.

This aspect of the company’s future strategy is close to the heart, or kidney for Prince Daniel, of the Swedish royal family. Prince Daniel received a kidney transplant from his father in 2009 at Karolinska University Hospital. For patients who have received a transplant, the ‘life expectancy’ of this transplant is critically important and anything to increase this survival time has a great impact on their quality of life. Crown Princess Victoria and Prince Daniel visited Idogen in January 2020 for a tour of the lab and an introduction to the Idogen technology. A royal visit for a worthy technology. Read more about the visit here; Kronprinsessan och Prins Daniel besökte Idogen – Idogen

One third of hemophilia patients develop antibodies to Factor VIII. Ensuring patients tolerate the ‘cure’ being provided to them is essential in the treatment of hemophilia and similarly for cures to other autoimmune disorders.

Manufacture of Idogen’s autologous clinical product has been developed in partnership with Radboud University Medical Centre, Nijmegen, The Netherlands. This centre has established experience with dendritic cell manufacture for other indications and other types of cell therapies making it the perfect partner for Idogen to outsource the researchers/scientists, QA expertise and infrastructure needed for clinical product development and manufacture. “We really worked as a team with RadboudUMC to combine our areas of expertise into successful development of the clinical product. We were able to identify and solve many issues through shared capabilities”, says Anders Karlsson, Idogen CEO. However, manufacture of the clinical product at industrial scale will require a shift to more classical CMO capabilities, something Anders believes the Nordic CCRM hub concept can be an attractive candidate. “We are very pleased to have reached this critical milestone where we have successfully produced the product off site in a way that meets our quality standards, so we feel confident that we will have a smooth transition of our process into future industrial manufacture”, says Terese Hylander, Idogen scientist since 2015 and has been involved in the tech transfer as a project leader.

Future products may include solid organ transplant tolerant DCs, conditioned by donor cells and autoimmune reversing DCs, conferring tolerance for disease specific self-antigens. The role of Idogen type technologies in ensuring the long-term success of curative cell therapies is in its infancy but an essential aspect to consider in risk mitigation for patients. “We have to start somewhere but we look forward to building Idogen’s product portfolio, along with the right partners, to address the needs of the millions of patients facing conditions with unwanted immunological reactions or suffering from autoimmune disease worldwide”, says Anders.